Saturday night/Sunday morning, the UFC opens their 2018 Pay-Per-View calendar with UFC 220 live from Boston, Massachusetts.  Fight tipster Will Burns has done the math inside GetBetSmart’s ‘FightModel’ and picked out a few selections. 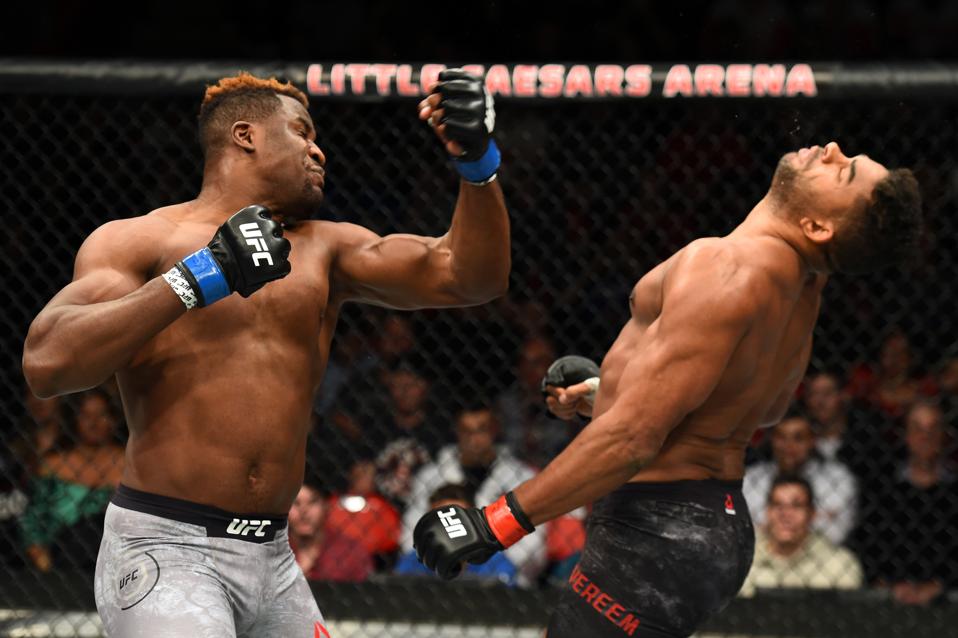 Even if you are a casual Mixed Martial Arts fan you must have caught footage of Francis Ngannou’s terrifying uppercut knockout of veteran Alistair Overeem just last month. It took the big Cameroonian just one minute 42 seconds to put Overeem to sleep and I think he can do the same on Sunday morning to current Heavyweight champion Stipe Miocic.

Ngannou has looked absolutely unstoppable in his six victorious fights inside the Octagon so far. His knockout power, in my opinion is the most commanding in MMA history, and the 31-year-old has shown a solid takedown defence, he’s managed to gather an average submission game and is incredibly daunting. He certainly has the potential to be most dominating champion the Heavyweight division has ever seen.

This is record the reigning champion is gunning for. If Miocic was successful come Sunday morning, he will become the only heavyweight in UFC history to successfully defend his title three times.

Miocic is 11-2 in the Octagon and is a strong, nimble heavyweight who himself possesses great knockout power (a former Golden Gloves champion), but his biggest threat in this contest will be his ground game. He holds incredible wrestling skills and has shown a brutal ground-and-pound throughout his career. Although the Cleveland native has a great durable chin and tremendous stamina I feel he wishes to grind a result out come Sunday morning. Meanwhile, getting Ngannou to the ground appears to be a difficult task looking at his past scraps.

I cannot see Miocic stopping Ngannou’s power and even if the champion can avoid a first round smashing, by the second round I see the Cameroonian’s hand raised. Our ‘FightModel’ is suggesting the best bet in this one is backing Francis Ngannou to win via KO/TKO at Betfair – we will be placing 2 points on at 1.72.

Francis Ngannou to win via KO/TKO at Betfair

This is our #UFCBanker double that has our best success rate including a 2.8 point profit in last weekends’ UFC Fight Night: St. Louis card here.

This is an interesting fight that brings an unproven commodity with heavy hands in Volkan Oezdemir up against a champion itching to set the score straight. Daniel Cormier enters the cage for the first time since that devastating defeat to bitter rival Jon Jones. However, the two-time U.S. Olympian was given the title back after yet another failed drug test for the disgraced Jones.

Swiss-born striker Oezdemir is a powerful puncher with surprising speed and agility and could cause Cormier some real damage early in the fight. He holds consecutive first round knockouts against Misha Cirkunov and Jimi Manuwa however neither holds the ground game that the champion does. He has a 15-1 record (3-0 in the UFC) but don’t get excited by that as the majority of that record is defeating cans in Europe and his one loss came due to a tap out by failed TUF fighter Kelly Anundson at Bellator 115.

Like a wounded animal, I feel Cormier will be dangerous in this fight. Before writing this up, I watched a lot of Cormier’s fights and especially concentrated on a bout against Oezdemir’s training partner Anthony ‘Rumble Johnson at UFC 210. Johnson, a strong stand-up fighter, like Oezdemir attacked Cormier from the off, but DC battled through the punishment and grounded Johnson down and tapped him midway through the second round.

I see a similar strategy this time round and Oezdemir being grounded by Cormier, either subbing or pounding him to a finish in the third.

Brazilian veteran Gleison Tibau takes on 26-year-old Islam Makhachev in the first fight of the night and I cannot look past the young Russian getting the job done in this one.

Makhachev won his Octagon debut in May 2015 as he submitted Leo Kuntz followed by a KO defeat to Adriano Martins at UFC 192. He then grinded two consecutive decision wins against Chris Wade and Nik Lentz heading into tonight’s bout.

Entering the cage for the first time since November 2015 following a two-year suspension, there is a lot of questions hanging over Gleison Tibau. One wonders what type of fight shape he will be in after such a long layoff. His last two wins were both by split decision, as he beat Piotr Hallmann in September of 2014 and he won a split decision against Norman Parke in January of 2015.

So it is difficult to hold any confidence in Tibau, I definitely give the edge in this bout to Makhachev via decision.

Daniel Cormier to win via KO/TKO or Submission (1.61)

Islam Makhachev to win via decision (2.10)