This article is produced in association with

The new Eredivisie campaign is underway tonight and Will Burns begins with a preview of tonight’s opener. Read on and good luck…

The charismatic Ron Jans leads PEC Zwolle into the fourth season of his management and they open the season with a Friday night clash in Nijmegen. Where new head coach Peter Hyballa will be aiming to continue the good work of his predecessor Ernest Faber, who led NEC to a top-ten finish last campaign.

The hosts come into the game with no real injury concerns as the squad fighting fit ready for the new campaign, however the first XI named tonight will show many changes. Last season’s first teamers Christian Santos, Navarone Foor, Anthony Limbombe, Brad Jones, Lucas Woudenberg, Todd Kane and Marcel Ritzmaier have all moved onto bigger clubs or returned to parent clubs. Let me point out that, these players accounted for 30 of the 34 league goals scored by the team last year.

Recruitment has proven to bring bodies in, but not replace the quality. Defensive reinforcements Segun Owobowale and Robin Buwalda have arrived from ADO, while Bosnian Dario Dumic arrived from Danish side Brondby. In midfield, Australian Stefan Mauk flies in from Adelaide United and young German winger Julian von Haacke (22) joins from Werder Bremen without playing a professional game for the Bundesliga side.

Trying to emulate the impact of the departing Christian Santos last term, the scorer of 17 goals in all competitions will be Reagy Ofosu, signed from Austrian outfit, SV Grodig, however he only found the net twice in 16 appearances and failed to secure a contact with his efforts.

Defeating PEC Zwolle tonight is a big ask in my opinion with the talent at hand. Jans’ summer transfer window has gone considerably better than Hyballa’s and they line up tonight with a far better squad in my opinion.

As always, Zwolle have lost some first-teamers too but on this occasion rather than players heading to bigger clubs, it’s been a case of talents like Sheraldo Becker, Lars Veldwijk and  Ouasim Bouy returning to their parent clubs. Highly-rated defender Thomas Lam was the only real talent leaving on a permanent basis to Nottingham Forest who has been decently replaced by a Ted van de Pavert from relegated De Graafschap.

Jans has once again capitalised on signing loanees as Ajax pair Queensy Menig and Django Warmerdam arrive for a season, as does Calvin Verdonk from Feyenoord and 18-year old Italian striker Hachim Mastour from AC Milan, who will wear number 98 this season, the highest in Eredivisie history. 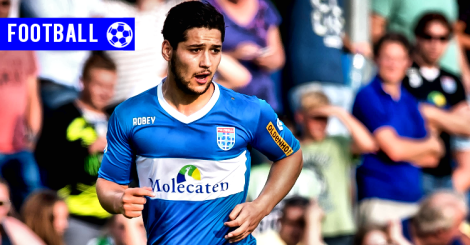 Aiming to replace the goals of Veldwijk, is Anass Achahbar (#30 in the 2015 TDF Top 50) a permanent signing from Feyenoord. The 22-year-old attacker has seen few chances at De Kuip, but I am expecting big things this season under Jans’s coaching. With Menig, Youness Mokhtar and Mustafa Saymak providing for the striker, I can see Achahbar scoring at least 15 this season, possibly starting tonight at an overpriced 3/1 to score anytime with Bet365.

Looking across the squad and the potential line-up for Zwolle, I see nothing but quality that could achieve even better than the eighth place last campaign. In goal, is the highly-rated youngster Mickey van der Hart. Protecting him will be captain Bram van Polen and Calvin Verdonk at full-back while experienced head Dirk Marcellis will partner either Bart Schenkeveld or debutant Van de Pavert in the centre.

Up front, will see Achahbar flanked by Menig and the speedy wing-back Kingsley Ehizibue with the creativity of Moroccan international Mokhtar sitting in the behind them. The talents of Ryan Thomas, Max de Boom and Stef Nijland will be waiting on the bench if goals are needed later on.

In midfield, the pairing of Saymak and Wout Brama are vital to the team’s performance. Meanwhile, like I stated earlier, in comparison to the Nijmegen squad, I see PEC Zwolle winning this game tonight. There will be goals, as always in the majority of Eredivisie games, but I see backing Ron Jans’ boys to take home the victory at 7/5 again with Bet365.