France return to action to take on underdogs Albania tomorrow night and Jake Jackman thinks the hosts should have no trouble. 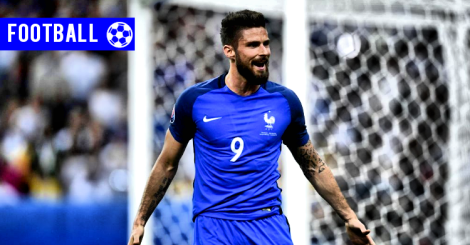 After a tough opening fixture against Romania, France will be hoping for a more convincing performance against Albania, who themselves put in a very good performance against Switzerland and were unlucky to lose the match. France have a great squad of players, but their tactics need work going forwards. They were quite open at the back, and their defence isn’t great. Adil Rami is inconsistent, while Bacary Sagna and Patrice Evra are both on the decline. The latter played particularly poorly against Romania, conceding a penalty in the process, and could be replaced by the youthful Lucas Digne on Wednesday.

Another rumour doing the rounds is that Didier Deschamps is considering moving to a 4-2-3-1 and incredibly the poster boy of the tournament, Paul Pogba, could be dropped if that does happen. That would take huge guts from the manager, who did substitute the Juventus midfielder during their opening fixture. The much maligned Olivier Giroud played well against Romania, with his movement being particularly impressive as he found himself in a scoring position on several occasions. Dimitri Payet was the best French player on display in the opening match, and showed he won’t shirk responsibility as he scored a great winning goal. If he would have missed it, he would have been criticised, showing his elite level mentality.

In terms of Albania, they did well against Switzerland, and only a goalkeeping mistake and a red card cost them, showing the small margin for error at the top level. The likes of Elseid Hysaj and Amir Abrashi looked bright and showed that there is quality in this Albania side. They will go into this fixture with relatively little hope, but will set up well and take a lot of heart from Romania’s efforts against the hosts, as it showed they weren’t formidable. The poor finishing from Albania is a worry, especially as they will probably have fewer chances on Wednesday. They need to make the ones that come their way count.

We should see a French side released from pressure in this one, as they did look nervy for periods against Romania. They will be boosted by the three points, and will look to express themselves more frequently in Marseille. I expect them to win much more convincingly, although Albania are no mugs at this level. If France want to be considered as serious contenders, they need to be putting on a show in their remaining group games, both to boost confidence and to put fear into the other nations.

As stated above, I think France will win, and I think France -1 (4/5 at Betfair) would be a good bet here. Although the first round of group games were very tight, I expect the second round to feature more goals as teams settle into the tournament. These group game are very important in setting the tone, and building confidence as a group. France need to put on a convincing show against Albania to get their fans to believe, as the French can be more of a hindrance when supporting their side, which is why the side need to get them believing. I also expect Olivier Giroud to score again (21/20 at Bet365), he is in great form for France and is a big contender for the golden boot.