Will Burns retutns with a look at Group E favourites Belgium and Italy whom face in off in what should be the game of the first round of group matches on Monday night. 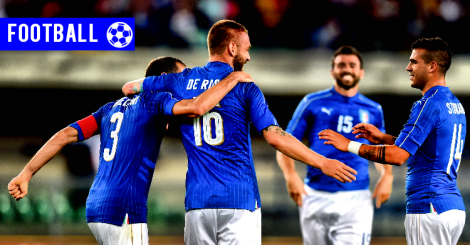 Leading Italy out for the last competition, Antonio Conte will wish to get off to a good start in his final tournament before moving into the hotseat at Stamford Bridge next season.

His side’s form has been indifferent to say the least, with just two wins from their last six, though both of those were in their most recent fixtures against two sides that did not qualify for the Euros, Scotland and Finland. That run also included a 3-1 loss against Monday’s opponents and they will be keen to avoid a repeat of that defeat.

Conte rotated between 4-3-1-2 and 3-5-2 during an unbeaten qualifying campaign, it is expected he uses the latter in this game. Playing with two attacking wing-backs (Matteo Darmain and Antonio Candreva) with a holding midfielder (Daniele De Rossi) and Southampton’s Graziano Pellé looks likely to play as the target man with Eder supporting.

Les Diables Rouges made a stuttered start to Euro qualifying, including a shock 1-0 loss to Wales, but found form in time to dominate in their final four qualification matches. In the end, they claimed top spot in their group and earned a coveted spot in Pot 1 of the Euro draw. On paper, they have the most talent of any squad in the tournament, however under head coach Marc Wilmots they will need to improve to oust France or Germany as favourites. That could start against Conte’s Italy on Monday night.

In team news, Wilmots only has one injury worry as time of writing, with Thomas Vermaelen is a doubt meaning youngster Jordan Lukaku could start at left-back with Jan Vertonghen pairing with usual central defensive partner Toby Alderweireld in the middle of defence.

Romelu Lukaku is tipped to start up front but he faces stern competition from Christian Benteke, Michy Batshuayi and Divock Origi. Creating for the Everton man will  be Radja Nainggolan, Axel Witsel and Marouane Fellaini who are all due to start in midfield. Eden Hazard and Kevin De Bruyne make up a terrifying six pack attack that I cannot see Italy coping with.

Can Italy breach the Belgian back four? Well Pellé failed to score against Vertonghen and Alderweireld last season in the Premier League so I’m saying no.