This evening sees Washington pitcher Stephen Strasburg looking to break records. Will Burns thinks he will break those records and in addition, Cardinals hearts. 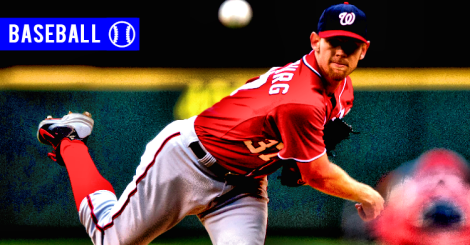 This game is all about National’s dominant pitcher Stephen Strasburg who is on a tear this season with Washington currently winning all eight games he’s started. On the way, he has broken a Nationals record winning his last 14 starts in a row. The Nationals have dropped five of their last eight games, including two straight, but have not lost since September 9th 2015 with Strasburg starting on the mound. It is some feat, that I see continuing tonight.

On top of that, there is a lot at stake for Strasburg in this ballgame. He would like to break another pair of records…

He can match the Chicago Cubs’ star pitcher Jake Arrieta for the best record in Baseball at 9-0, something no pitcher in National’s history has ever achieved. The now-retired Pedro Martinez had been the last to begin 8-0 in the 1997/98 season. Strasburg also can break a tie for the franchise-record winning streak, having won 11 consecutive decisions just as Dennis Martinez (1989/90) and Livan Hernandez (2005/06).

Strasburg is a major part to Nationals success this term, Washington has averaged 6.7 runs in his 10 starts. The impressive stats do not stop there. He has only allowed a 2.79 ERA (Earned Run Average) for the opposition while his 11.44 strikeouts per nine innings rank second in the MLB.

Now the Cardinals can hit. They lead the National League with a total of 68 home runs and are among the leaders with 176 walks after drawing four apiece off Max Scherzer and Gio Gonzalez in the last two days and defeating both. However, the last time they came up against Strasburg, they got two runs and four hits off him in the first inning (29th April), but he held them off to no runs and four hits through the next six innings to claim a 5-4 victory.

This evening, his opposite is the Cardinals’ Michael Wacha who this season holds an incomparable W2-L5 record and is pitching like he belongs in the minor leagues. He is the first pitcher to allow at least six runs in three consecutive starts since Mike Maroth in 2007. He’s given up 20 runs and 24 hits in 12 innings during that span. The right-hander allowed a career-worst eight runs in four innings of a 12-3 loss to the Cubs on Tuesday.

Washington has hit six homers through three games of this series already, including two from Ryan Zimmerman and one by Bryce Harper on Saturday night. Zimmerman tied a career high with four hits and Harper hit his second homer in three games after going 11 straight without one.

That is why I’m going big on the Nationals at 57/100 tonight. Enjoy the game and good luck!